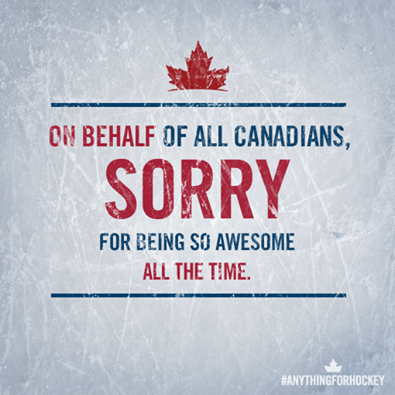 As predicted the Canadian men’s hockey exacted revenge on the Norwegians on Thursday with a 3-0 beating that was more complete than the score would indicate.  Canada followed that up with complete blowout against the Austrian team today, 6-0, presenting the country with a Valentines gift.

On the medal front, not so good the past few days, with only a silver medal by Patrick Chan in figure skating.  A mini-slump I’m sure and one that will not last long.

Overall, we are holding down 3rd spot with 4 gold and 11 total medals.

To round out today’s post, I bring you 2 things.

Second, free beer in Sochi, but only if you have a Canadian passport, or a Canadian friend I guess.

A bit of a down day for medal count, 1 silver, but even that has a story.  Denny Morrison won the silver in the 1000 metre long track speed skating, that is the fact.  Now the back story.  He is our best skater at this distance, but, fell during our Olympic trials and did not qualify for this race.  Fast forward to today,  The Canadian who did qualify, Gilmore Junio, decided that for the team, Denny should run the race rather than him.  Good choice, we won a silver.  Another example of Canada at it’s best.

Even with this medal, we still trail the Viking (Norway) hordes in total medals, and the Germans in gold medals.  Having said that, we are about to exact a measure of revenge against the Norwegians.  Tomorrow morning, those robust northerners will have the crap beaten out of them in men’s hockey, as Canada flexes it’s ample muscles against the hapless Nordics.

Speaking of hockey, I fart in the general direction of the USA women’s hockey team,  HAHAHA on you, as the Canadian woman beat up on you today, allowing us a potential match up with the German women to exact revenge upon them as well.

Woke up this morning to the sound of a gold and a bronze medal.  Once again our skiers put 2 people on the podium, this time in the Women’s Ski Slopestyle.  Congratulations to Dara Howell for the gold performance and to Kim Lamarre for her bronze.  At the end of the day, we fell from first as those accursed Norwegians, the scourge of the northern seas (and discoverers of Canada) passed us with a total of 11 medals, including 4 gold, to our 9 with 4 gold.  Tomorrow is another day, and we will defeat the Viking hordes.

On a more friendly note, a Canadian showed the world what sportsmanship is today.  A Russian cross-country skier, Anton Gafarov, broke his ski when he crashed early in the race.  He was so determined to finish, that he carried on, basically on 1 ski, with no chance to win.  A gruelling decision.  From out of the crowd, Canadian skier Justin Wadsworth came forth with a ski, which he gave to Gafarov.  The Olympic spirit personified.  Anton went on and finished the course.

I think I may be insufferable to non-Canadians for the next week or 2.  It is Sochi 2014, the Winter Olympics, and Canadians own winter.  There is every chance that our nation of 33 million will take on the world and come out on top of said world.  Day 3 is now complete and we are leading the way in medals and gold medals, positioned strongly to take even more tomorrow.  Today we set a personal best 3 day total ever and now have 3 Gold, 3 Silver and 1 bronze.  For the second time in moguls, we put the gold and silver medallist on the podium.  Congratulations to repeat gold medallist Alexandre Bilodeau and to silver winner Mikael Kingsbury.  Congratulations as well to Charles Hamelin who won the first of what Canada hopes will be 3 gold medals, this one in 1,500 metre short track speed-skating.

Don’t touch on sports to much anymore, but it has been an interesting few weeks.  First off, the Rugby World Cup 2011was completed last week, and I can’t believe this but I am now hooked on rugby.  Great game and nothing beats the challenge (Haka) by the All Blacks of New Zealand at the beginning of each game.  The All Blacks won it all, beating France in the final.  On the way they schooled a game Canadian team by a score of 79-15.

Second up is the CFL.  My beloved Saskatchewan Roughriders have crapped out.  I cannot wholeheartedly cheer for any other team so I will make an objective prediction.  Prior to last week I would have said the BC Lions in a cakewalk, then in true CFL fashion, they had their butts handed to them by the Hamilton Tiger Cats.  Having said that, I will still go with BC, likely meeting up with Winnipeg in the Grey Cup.

Third up is the Vancouver Canucks.  As I expected, they are playing as well as a non-playoff team and are already in panic mode.  Roberto Luongo

is a spent force in Vancouver and I am sure that the Canucks will make an effort to ditch him.  He can’t stop anything right now.  In addition they traded Mikael Samuelsson and Marco Sturm to the Florida Panthers for David Booth and Steve Reinprecht.  Reinprecht heads straight for the AHL, so essentially they dumped 2 for 1.  Booth, although having potential, is just another fast skater with no toughness and questionable defensive skills.  He was a minus 31 in Florida last year, with 23 goals, 17 assists and 26 penalty minutes.  Not the player they were needing.  Even Samuelsson had more points and penalty minutes than that.  All the Canucks gain is youth.

The Winnipeg Jets are rocking, doing as expected and giving the fans some hope for the future.  Last night’s 9-8 victory in Philadelphia against the Flyers was both ugly and beautiful all at the same time.  The Jets have an excuse to be on the bubble for the season, maybe the Canucks can learn something  from the Jets.

Fourth, the World Series.  Baseball is a wonderful game to watch when everything is on the line.  In no other sport do you have such drama, literally hanging on every pitch.  Last night was no exception.  David Freese is now a legend, whose heroics will be remembered for eternity in baseball lore as will the St Louis Cardinals comeback.  The Texas Rangers will have to shake this one-off if they want to win.  Regardless the Series has been a true Fall Classic, and Game 7 could be one for the ages.

As the Real Canadian Sports Blog, I have been remiss in reporting to the world that Canada is participating in the International Rugby Union World Cup.  The competition is being held in New Zealand, home of the world-famous All-Blacks. Canada has performed well to date, defeating Tonga early last week 25-20, and losing to number 5 ranked France 46-19 on Sunday.  The score did not represent the true gist of the game as France pulled away late in the contest, taking late points from a visibly tiring Canadian squad.  This was Canada’s 2nd game in 4 days.  Canada is currently 4th in their group after 2 games, with the top 3 advancing to the next round.  Their next game is September 27 against Japan.

As a result of their showing last week, Canada advanced 3 spots in the world rankings to 11th.