On a recent rip to the Canary Islands, we took a tour of the island of Lanzarote.  The island is about 80 miles off the coast of Africa and is an autonomous province of Spain.  The island has been inhabited by Europeans since the 14th century.  It was devastated by a volcanic eruption in 1730, which lasted until 1736.  Most of the island was covered by lava and ash, creating this landscape.  A very interesting tour.

We last left off in Toledo in our Iberian adventure.  Hard to believe this trip was a year ago.  We left Toledo via train, heading back to Madrid to make another train to Seville.  Arriving in Seville, we caught a cab to our home for the next few nights, the Hotel Amadeus.  Situated right in the heart of the old city, it is quite stunning.  We spent 3 wonderful days and nights here, with a few side trips.  We tend to do B&B’s when we travel, but they seemed to be in short supply here, ergo a hotel.  No regrets on this one.

Not surprisingly, Seville has both a major cathedral and a Moorish Alcazar.  First the cathedral, an awe-inspiring structure that is known for the tomb of Christopher Columbus.  The Cathedral of Saint Mary of the See, constructed in the years between 1402 and 1506, is a recommended spot.  Not the oldest cathedral we’ve been in, but one of the most impressive. It is the 3rd largest cathedral in the world and a UNESCO world heritage site (stroke this one off the list).    Let’s let the pictures do the talking from here.

The size and majesty of this building can be understood just a bit by this perspective shot.  This is only a small section of the cathedral.

We climbed to the top of the tower, which gives some spectacular views of a great city.

Close by, and making up part of a magnificent monument centred old part of the city is the Alcazar.  Of Moorish construction dating back to the 10th century, it consists of a former residence and some beautiful gardens and grounds.

The city is filled with excellent restaurants and Tapas places.  A few recommendations?  Really just one, La Taberna Poncio is our favourite.  If we had discovered this place on the first night, we never would have tried anywhere else.  The food was great, the service spectacular.  A thoroughly enjoyable experience.  After this, every else was just good and kind of touristy.  Poncio was basically locals and very Spanish.  There was a bit of a language issue, which again spoke to the atmosphere.  Highly recommended by Lori and I.  A few photos from places we sat down at.  Hard to find a place without a great setting.

We decided to stay an extra day here, but could not stay at the Amadeus, meaning we had to find alternative lodging.  This leads to a bit of advice.  DO NOT STAY at the Hotel Alcazar.  Supposedly a 3 star, more like a 2 star.  Not as advertised, but any port in a storm.

We leave you with a video that I posted once before.  I call it the Skaters of Seville.  Canadians have an interest in skating, a genetic thing, and love to do and watch it, on wheels or blades.  We had some fun watching these people.  Maybe there is hope for Spanish Ice Hockey??

The task this week from WordPress is “Weekly Photo Challenge: Carefree”.  This was especially hard to come up with something.  I mean. 9 bajillion pictures and finding one that epitomizes carefree, a toughie.  Then I ran across this beauty from our trip into Barcelona in October 2012.  We were at a restaurant with some friends from the UK, when, quite suddenly, a pretty good thunderstorm rolled in.  We were seated outdoors, under a bit of a covered part of the sidewalk.  Wasn’t helping a lot, so we backed off closer to the walls of the building.  John decided to stick it out, showing not a care as he downed his tea in the driving rain.  Check the pounding rain on the pavement on the street, and a few very wet people.  Classic.

I chose these pictures for the Weekly Photo Challenge: Masterpiece as I love scenery and consider it both man’s masterpieces of creation complimenting the natural beauty of many vistas.  The first is photo taken in Ravello, Italy.  It shows the creativity of man, building homes and agriculture in nearly impossible locations.

This next photo wass taken in Montserrat, Spain.  Absolutely stunning scenery.  If you are in Barcelona, you MUST go to Montserrat.

This week we have The Weekly Photo Challenge: Pattern.  We have seen a lot of patterns in our travels, clouds, lights, architecture, but, to date, we have seen nothing more interesting than the Mezquita de Córdoba in Cordoba, Spain.  A unique structure that melds a mosque, converted to a cathedral.  Originally started as a church, it was converted to a mosque after the Moors conquered this part of Spain.  It was largely rebuilt and then, when the area was retaken by the Spanish, it was again converted to a church.    A very interesting background and a stunning combination of various architecture.

For this challenge I have to return to La Sagrada Familia in Barcelona, Spain.  The façade is amazing, to the point that it is almost impossible to do it justice in a photo.  I sat, staring for the better part of an hour trying to take it in, without success.  Very inspiring, very beautiful and hard to imagine the thought, time and effort that was utilized to create it. 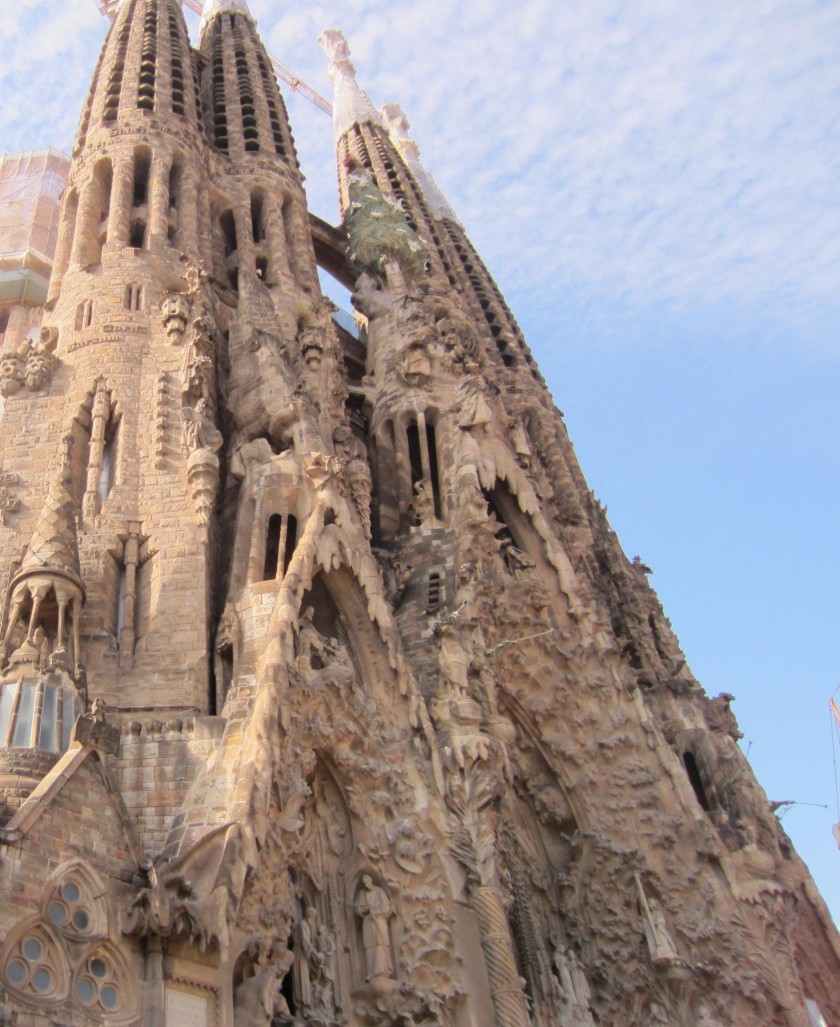 As Canadians, we love all things skating.  We were wandering the streets of Seville,when we came upon this scene.  Quite interesting.  As we watched, the crowd got bigger, the skating got better and the busking part came out.  All in all, easy stuff on ice, not so easy on wheels.  Author’s note: first time playing with Movie Maker, forgive me as I learn.

After Lisbon, we headed for Toledo. We flew Lisbon to Madrid, caught a cab at the airport to head to the train station and then a high-speed train to Toledo.  A trains, planes and automobile kind of day.

The highlights, the longest (and easiest) walk up a mountain, the greatest Sangria ever and an introduction to Spanish cathedrals.

They do train stations right here.

It seems they know how to do hotels as well. Hostal Del Cardenal

We had lunch at a little place called La Boveda and experienced the best sangria ever.  The recipe includes, Gin, Cognac, Martini & Rossi, sugar, red wine, lemon juice, portion to taste,  wow.  Lunch was good to, but it tasted better after each pull on the sangria.

To reach the town from the hotel, we had to scale a mighty mountain.  It was tough as we had to walk from the top of one escalator to the bottom of the next one.  Exhausting.

And of course, the cathedral.

We thoroughly enjoyed our stay here.

The Sagrada Familia in Barcelona is a beautiful example of what well thought out lighting can do.

On our arrival in Lisbon. Portugal, we were saddened to be informed that my cousin Lynn’s husband Dale had succumbed to cancer.

Keeping in mind that we are not Catholic, and neither are Dale and Lynn, we decided on a proper tribute (we think) in that we were in Spain and Portugal, both of which have a multitude of beautiful cathedrals.  We decided we would light a candle in remembrance in each cathedral we visited.

Out travels now took us to Montserrat, Barcelona and Funchal in the Madeira Islands.

Our first candle on this part of the trip was lit in Funchal, the capital of the Madeira Islands.  The church is The Church Of our Lady of Monte.

The interior of Church of our Lady of Monte in Funchal.

Our next opportunity was in Barcelona.  We actually visited 2 churches here and lit a candle in each. The first was the iconic Sagrada Familia.  This first shot is of the interior.

This is one of the exterior.

Our next stop was Cathedral of Santa Eulalia, or the Barcelona Cathedral.  Another amazing structure.

A candle for Dale

Our next visit was Montserrat, a hillside monastery.  We visited 2 churches here.  the first was a chapel that we had to first take a cable car and then walk a couple of miles along the mountain to get to.  The Capella de la Santa cova.

People left articles here in remembrance as well as candles.  We left these seashells on a bench.  Please look for them if you are ever there.

Our last stop was the Santa Maria de Montserrat, the main basilica.

This was the last candle that we lit.  We will miss you Dale.

We Love To Travel

We Are Going Sailing In The KootenaysJuly 24, 2015
Vacation in the Rockies
Join 783 other followers

How Many Have Stopped By

Where You Come From

I recently had the pleasure of chatting with Cranbrook, British Columbia artist, Maddisun. She is a hard-working independent artist with a future in this business. Having said that, we began our chat with a question about her beginnings in the musical world. Growing up, she played with her father, and her aunts were country singers. […]

A Chat with Sarah Smith

Today, we chat with singer, songwriter, player, Sarah Smith. Her online bio speaks to her openness at a very deeply personal level. This comes through in her songs, especially on her latest album, “Unveiling”. We started talking about her beginnings. Sarah’s parents were involved in their church. Her mother sang solo in the choir and […]

Born in 1940, Sylvia Tyson (Fricker) is an important part of Canadian music history. Best known as part of the folk due Ian and Sylvia, she continues to perform with the folk group Quartette and has since 1993. During the Canadian Content days of radio, she and her ex-husband Ian Tyson, were staples on Canadian […]

It’s Friday, and a good week it was. Just a reminder, we are looking for contributors to the blog. We are planning on expansion in the new year and it is your opportunity to get in on the ground floor. Do you like music, sports, food, beverages, travel or just like to write, then we […]

A Chat With Betty Moon

Today I chat with Betty Moon.  She is an accomplished artist, originally from Toronto, now living in Los Angeles, who has been recording since the 1980’s.  The interview celebrates the arrive of her 11th studio album, “Cosmicoma”.  Her first recording, in 1986, was while with her band Bambi.  This led to a recording contract with […]

We Love To Travel

We Are Going Sailing In The KootenaysJuly 24, 2015
Vacation in the Rockies
Join 783 other followers

How Many Have Stopped By