Three Nights (and Days) in Montreal – The Second Night

Day 2 of the Montreal portion of this adventure, and it will be a full day.  We scratched the surface of Old Montreal and were now intent on seeing as much as we could on this beautiful October day.  The temperatures cooperated fully and we enjoyed sun and mid 20’s (Celsius).  Shirtsleeves and comfort all day.  Our first stop was for sustenance as usual and we found a patio to our liking at La Sauvagine.  The food was excellent and the beer was quenching as well.  First the food.  We had Pork Medallions and they were excellent.  They, like the beer, tasted exactly like “I want more”.

The beer was a local brew called Boreale.  It was a fruity brew, almost with a hint of grapefruit.  I enjoyed it, but would not drink more than one at a sitting.  It did go well with the meal though. 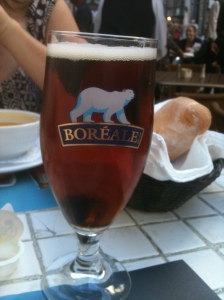 It was a s cold as the bear indicates

Now energized in the wrong direction (full and beered), we set out to check out the shops and take a walk along the St Lawrence River.  Very impressive job of vitalizing the area.  The shops are many, the restaurants excellent and abundant.  The riverbank has been turned into a gathering point in the city and is full of both tourist and locals, always a good sign.

Out in the river is an island created in the 60’s for Expo 67, a world ‘s fair.  The island was built using material excavated during the making of Montreal’s subway system.  The two photos below are structures used in the fair.  The first is a geodesic dome that was the American pavilion and the second is a concept apartment complex know as Habitat.  Habitat is unique in that all the living spaces share very little common wall space and none overlook another one, giving unparalleled privacy.  It was a display during the fair and is now in use as a condo and is a prestige address in Montreal. 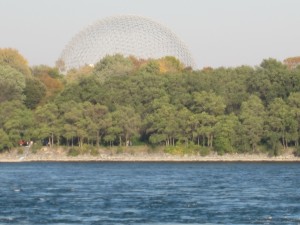 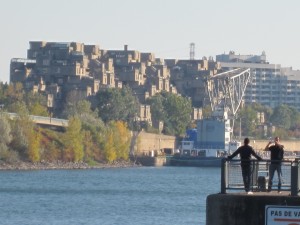 After spending some time along the riverbank, we moved back to shopping.  We were in position to visit a unique shopping area, Marché Bonsecours.  It is a heritage building, opened in 1847, and has been a market since it opened.

The inside of the market itself is a myriad of high-end shops and restaurants.  The layout is basic, but the environment is very aesthetically pleasing.

Almost face-off time.  By a complete fluke we were in Montreal on the night that my long-lost Winnipeg Jets were to play their first NHL game in 15 years, and their opposition, the Montreal Canadiens.  To make it even sweeter, one of the most famous sports bars in Montreal, La Cage aux Sports du Vieux-Montréal was just down the street from the mall.  We quickly made our way over to the bar and walked up to the hostess, mere moments before a flood of people arrived.  I spied a seat right in front of a tv and told her we were from Winnipeg and would love to sit there if we could.  She led us to the table and we proceeded to watch the Jets absorb a beating at the hands of the hated Habs.   It was strange watching the game, with all the cheering happening at the wrong time.  It was good time, one that I will always remember.

Following the game, we set out to find supper.  We located an excellent restaurant, with a live jazz session.  The place is called Modavie and is known in Montreal for its food, ambience and music.  We booked a time about 45 minutes from the time we came upon it and went for an evening walk up Rue St Paul. 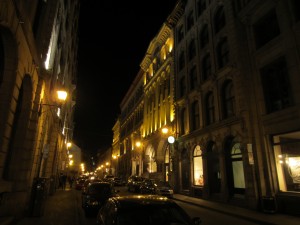 Back to Modavie, we ended the day with superb seats, right beside the players and enjoyed a great meal.  The players were Jon Gearey and Louise Thibault.  Very good.  Very enjoyable.  Couldn’t record them from where we sat, but I did find a video on YouTube to share.

After we ate, we did a bit more exploring and then headed back to the hotel.  Good evening, looking forward to tomorrow.