Three Nights (and Days) in Montreal – The First Night

We had enjoyed our two nights in Mont-Tremblant, Quebec, but were now ready to hit the big city.  Montreal is a cosmopolitan city, with great restaurants, plenty of history and something for every taste.  After a 2 hour drive we arrived at our hotel, The Opus.  Situated at the corner of St Catherine and Sherbrooke, it is perfectly placed to access Vieux Montreal (old Montreal) and the downtown core.

The Rooms at the Opus

We also had a fairly interesting view.  Canadians will know this theatre as it is the site of a TV show on CBC as well as the centre of operations for the yearly Montreal Just For Laughs Festival. 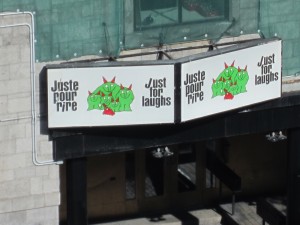 As usual, we spent the first afternoon on an orienteering tour to first, find sustenance and beer, and second, to figure out where we were in relativity to where we wanted to be.  My phone said straight up St Catherines and we would find Vieux Montreal, so off we went.  The phone is seldom wrong, and after  30 minute walk, we were in the middle of Old Montreal, enjoying a beer and some appetizers with a great view of the St Lawrence River.  A great way to spend the day, or an hour or so.  The beer was satisfying,  St Ambrose,  a local beer by Brasserie McAuslan.

Our thirst taken care of, we started to wander the area.  We located a nice spot for lunch called Galiano’s.  The people watching was spectacular and the food was good.  We had good reason to celebrate as it was Jetsmas Eve.  What the heck is that you ask.  Anyone from Winnipeg would, or should,  pick up on this.  It was the night before the first NHL game in 15 years for the long missed, and beloved Winnipeg Jets.

We now had our bearings, and again, very similar to any older city, it was very easy to get around and not get lost doing it.  We checked out some shops and headed back towards the hotel.  The area has several highlights.  Jacques Cartier Square is a central gathering spot, ringed by restaurants with the central square filled with tourist shops.  Lots going on, with buskers everywhere.  Kind of touristy, but expected in areas like this.  One has to move away from the square to really experience the area.  Very crowded with lots of puzzled looking people milling about.

Back at the hotel, we booked a reservation for 9:00 at a supper club on site called KoKo Restaurant and Bar.  A supper club is new to us.  The idea is supper, shocking, followed by a turn into a night club at 11:00.  They remove most of the tables and electronica abounds.  Very cool.  We had an excellent supper, matched perfectly with an excellent wine and some perfect after dinner aperitif.

The meal was excellent, the pasta perfectly done, the shrimp and scallops exactly as they should be done.  Very enjoyable.

A poor shot.  The wine is now a regular at our home.  A nice Australian by Pfeiffer, this being the Merlot.  We have noticed in Quebec that old world wines dominate on most wine lists, so it was refreshing to find an Aussie here.   Overall, the dining experience was superb and highly recommended by us.  The night club experience was wild.  We people watched for a couple of hours, enjoyed a few Frangelico aperitif.  Very loud, and very crowded.  We decided to depart around 1 AM and leave the serious partying for the younger set.  Little did we know that we will be experiencing the night until 4 AM when the music finally shuts down.  We overlooked the outside deck of the club and, boy, was it loud.

We had a great day and evening and went to sleep knowing the next 2 days will be superb, on the food and drink front for sure.